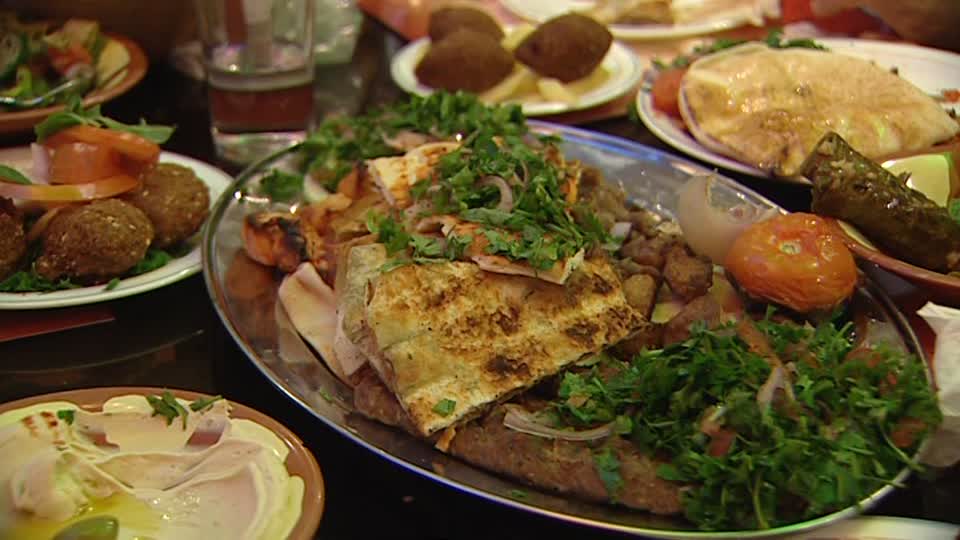 Middle Eastern cuisine is the cuisine of the various countries and peoples of the Middle East. The cuisine of the region is diverse while having a degree of homogeneity. It includes Arab, Iranian/Persian, Israeli/Jewish, Assyrian, Armenian, Kurdish, Cypriot, and Turkish cuisines. In 2017, Middle Eastern cuisine was claimed by many sources to be one of the most popular and fastest growing ethnic cuisines in the US. Some commonly used ingredients include olives and olive oil, pitas, honey, sesame seeds, dates, sumac, chickpeas, mint, rice, and parsley. Some popular dishes include kebabs, dolma, baklava, yogurt, doner kebab, shawarma and Mulukhiyah.

Lamb and mutton have always been the favored meats of the Middle East. Pork is prohibited in both Islam and Judaism, and as such is rarely eaten in the region. Prominent among the meat preparations are grilled meats, or kebabs. There are a wide variety of these grills, with many regional specialties and styles. The most common are the cubed cuts on skewers, known as shish kebab in most places. Chicken may also be grilled in the same fashion. Another common variety is kofta kebab, made from ground meat, sometimes mixed with onions and spices, shaped around the skewer like a long sausage and grilled. Kebabs are typically a street or restaurant food, served with bread, salad, and pickles. It is not usually prepared in domestic kitchens.

Meat and vegetable stews, served with rice, bulgur, or bread, are another form of meat preparation in the region. Kibbeh is a pie or dumpling made with meat and cereal. The most common are made with ground meat (typically lamb) and burghul, worked together like a dough, then stuffed with minced meat that has been fried with onion, aromatics, and, sometimes, pine nuts or almonds and raisins. This can either be in the form of individual small dumplings (usually shaped like a torpedo), or in slices like a cake, baked on an oven tray with the stuffing placed between two layers of the dough. One variation is kibbeh naye, raw kibbeh, which is made by pounding raw meat and burghul together with seasoning and served with dips of lemon juice and chili sauce.

During the month of Ramadan, food consumption increases dramatically throughout Muslim communities. Breaking the fast becomes a banquet, with exchanges of invitations between kin and friends, and public banquets held by charities and associations. Cafes and pastry shops are open at night, and a carnival atmosphere prevails in the streets. Many Muslims, following the reported example of Muhammad, break their fast with a date, followed by a variety of dishes. Sweet pastries and puddings are always present on Ramadan nights everywhere. The end of Ramadan is marked by a festival, Id ‘al-Fitr, a feast that breaks the fast, during which a great quantity and variety of sweets and pastries are consumed. The other major Muslim feast is that of ‘Id al-Adha, the feast of the sacrifice, which occurs during the pilgrimage month. At this time an animal, usually a sheep or a goat, is slaughtered in every household that can afford it, and great banquets are prepared, with an obligation to give food to the poor.