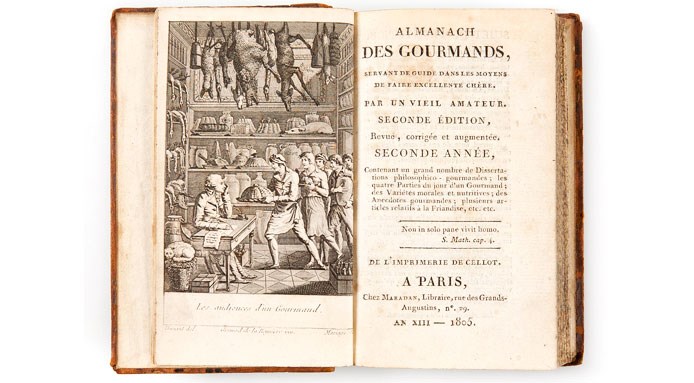 Restaurant, establishment where refreshments or meals may be procured by the public. The public dining room that came ultimately to be known as the restaurant originated in France, and the French have continued to make major contributions to the restaurant’s development.

The first restaurant proprietor is believed to have been one A. Boulanger, a soup vendor, who opened his business in Paris in 1765. The sign above his door advertised restoratives, or restaurants, referring to the soups and broths available within. The institution took its name from that sign, and “restaurant” now denotes a public eating place in English, French, Dutch, Danish, Norwegian, Romanian, and many other languages, with some variations. For example, in Spanish and Portuguese the word becomes restaurante; in Italian it is ristorante; in Swedish, restaurang; in Russian, restoran; and in Polish, restauracia.

Although inns and hostelries often served paying guests meals from the host’s table, or table d’hôte, and beverages were sold in cafés, Boulanger’s restaurant was probably the first public place where any diner might order a meal from a menu offering a choice of dishes.

Boulanger operated a modest establishment; it was not until 1782 that La Grande Taverne de Londres, the first luxury restaurant, was founded in Paris. The owner, Antoine Beauvilliers, a leading culinary writer and gastronomic authority, later wrote L’Art du cuisinier (1814), a cookbook that became a standard work on French culinary art. Beauvilliers achieved a reputation as an accomplished restaurateur and host, and the French aphorist and gastronomic chronicler Jean-Athelme Brillat-Savarin, a frequent guest, credited Beauvilliers with being

Before the French Revolution, aristocratic French households maintained elaborate culinary establishments, but when the Revolution reduced the number of private households offering employment, many chefs and cooks found employment in restaurant kitchens or opened their own eating establishments. By 1804 Paris had more than 500 restaurants, producing most of the great chefs of history and creating many famous dishes.